The struggle for land rights 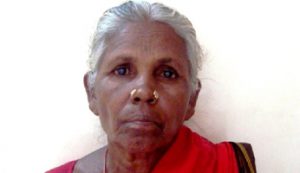 A major cause behind many human rights violations committed against Dalits is denial of access to resources. In particular, violence against Dalit women is often directly connected to their lack of control over resources .Veerammal and her husband, both originating from the Arunthatiyar community, lived together in Ambedkar Colony, Kodangipatti village in Dindigul district. In a nearby village, they owned two acres and 40 cent of dry land, which had been issued under a government scheme. Veerammal’s husband passed away in 1984 and after that a man from a dominant caste started to harass Veerammal, demanding her to hand over the land. Since then Veerammal has struggled to reclaim control over the land, a long battle that took 25 years for her to win.

Veerammal’s land is located in Puliyamarathukottai village only two kilometres away from her home. The surrounding land is owned by five Dalits and together they cultivated a total area of 18 acres for agriculture use. Next to their land, a man from a dominant caste had four acres of wet land, on the northern side of Veerammal’s land. He was also engaged in agriculture but not satisfied with his lot of land.

One day back in 1985, Veerammaland two relatives named Ramamoorthy and Alagammal had gone to the land to cultivate as many times before. Out of nowhere, the man owning the land next to theirs suddenly approached them and claimed that they had no right to use the land. He said that the land belongedto the Muthalamman temple, which was his community’s deity. Veerammal objected to this and explained to him that the land had been issued years ago to her husband and her and that she and her relatives had all right to conduct agriculture there. The man responded to this by calling Veerammal and her relatives by their cast name and assaulting them with his cane. They left the place very intimidated and decided not to further confront the manface to face.

Veerammal, Ramamoorthy and Alagammal went to the police to file a complaint against the attacker. However, the police did not register the incident but instead went directly to the man to warn him. They told him to immediately hand back the land to end the dispute. The man promised to take a step back and not bother anyone, but still claimed that the land rightfully belonged to his community and refused to return it.
Being a Dalit woman without a husband, Veerammal was picked as the main target for the dominant caste people in their goal of obtaining control over the area. Veerammal had no knowledge of legal rights and she was scared to go near the land in fear of being attacked again. In their eyes she was weak and defenceless, but they were wrong. Veerammal was determined to get her land back, she just did not know what to do and where to turn to.

With help from a local activist Veerammal filed a lawsuit in Palani sub court in the year of 1986. Seven years later, 1993, she got a favourable judgement declaring the land as hers. However, the man claiming the land did not accept this and in 1996 he appealed the court against the previous judgement. Following this, Veerammal received another judgement in 2001, one more time proving that the land was issued to her and her husband. Nonetheless, the man did not stop harassing her and the other land owners. At this time she had spent many years of legal battle in the court, but as it did not stop the dominant caste people from targeting her, she began to lose hope of ever getting her land back. During the period the case had been pending in court, Veerammal had not been able to access her land since the man continuously controlled the area and prevented her from cultivating the fields.

Ten years after the last judgement, the accused once more approached Veerammal and Alagammal and tried to pressure them to give him the legal rights to the land. He assured them that he would bear all the expenses that they had spent in court, if they only handed over the certificate. When the two women refused, they were again subjected to threats. The man did not take no for an answer and when he could not persuade the women by verbal means, he kept the land under his control by force.

This time Veerammal contacted Evidence for advice about how to proceed. She got supportive counselling and Evidence’s staff prepared a complaint on behalf of her, which was sent to the State Human Rights commission, government authorities and police officials, calling for appropriate action. With this support Veerammal was able to pick up her courage and hope again. Veerammal narrated the course of events very clearly when she spoke with officials during the investigation. She was determined to get her land back once for all. The District Superintendent of the Police in Dindigul started an inquiry and the land was eventually retrieved from the dominant caste people.

Veerammal was not the only one affected by the illegal land grabbing, but she was the one who picked up and led the struggle. All 18 acres of land, belonging to five Dalit families, are now back in its rightful hands. From the beginning Veerammal was scared and unaware of her rights. During the 25 years she persistently fought for justice, she has grown a confidence and gained knowledge to become fully aware of her rights. She still lives in Ambedkar colony with her now grown up daughter, son in law and grandchild.  They are now free to use the land as they wish without being controlled and attacked by people from the dominant caste.       Owning land is not only an income contributing resource, it is also a resource closely connected to self-dignity for Dalits. Veerammal is very proud of having land of her own and no one can take that away from her. Her land is like a mother for her. Women living in rural areas across India share this feeling, but many of them face similar problems and do not know where to turn and voice their issues. Veerammal showed that with a little support, she could defeat the odds against her and win the long and difficult battle, to reclaim her land and rights.